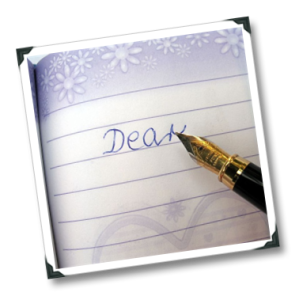 I need a pen pal.

I need a pen pal because I used to have a roommate that I found on Craigslist, but he moved out after a few weeks.  Now I live alone.

I need a pen pal because I used to talk to co-workers,  but then they said,  “Why don’t you just work from home?”  I told them that I didn’t mind the commute, but they keep on telling me it would be better if I worked from home.  So I do, but now I don’t have any face-to-face interaction from work.  When I call in they ask me to “just say it in an email” so I do.

I need a pen pal because I joined a book club at the local library.  But they said that it would be easier to Skype at a certain time, like on Oprah, but whenever I show up they aren’t there.  I have never actually Skyped with another person before.  I bet it’s fun.

I need a pen pal because I joined Facebook, but no one sent me a friend request or confirmed me as a friend.  So I don’t have any friends.  At least on MySpace I had Tom. He never wrote back, but at least I could send him a message.  And I am sure he read it, but he was just probably too busy to respond.

I need a pen pal because, when I go to the grocery store and I am checking out, the cashier always tells me to go to the self-checkout.  But I don’t want to because I want a person to ring me up.  But they keep saying, “some people have to use the self-check out, otherwise, the cashier lines get too long.”  It just always seems to be me.